Well, it’s the middle of August, which means it’s time for the Iowa State Fair. Living in Des Moines, we’re only about a ten minute drive from the fairgrounds, which makes it very convenient. My husband and I weren’t planning to visit the Fair this year,  but after finding ourselves enjoying a lazy Sunday afternoon and discovering that the last day of the Fair was 1/2 price admission, we decided to venture out. 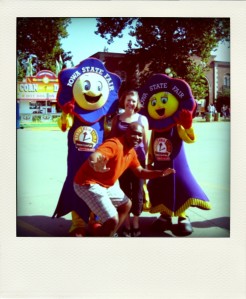 Posing with some giant Fair ribbons in 2009

We tried to see things we didn’t see on our last visit (two years ago) and boy, we succeeded! First, we happened upon a small Civil War reenactment camp and spoke with a woman about hair jewelry. The camp was located next to a smart, white building that houses the  Ralph H. Deets Historical Museum, a Museum dedicated to the history of the State Fair. Who knew? The Museum was surprisingly nice, since I have seen “museums” at other fairs that were little more than a dusty, drafty barn full of rusted farm equipment. Anyhow, the Museum really helped me understand and connect with the history of the Fair. Volunteers were located throughout the building–which was originally built by a local organization as a place for its members to relax during the fair–and were ready to answer questions.

While the collections practices could be improved (I saw some straight pins, thumbtacks and tape used in some of the cases) the exhibits were well-organized and the interpretation compelling. And that can be a difficult task when you’re dealing with 157 years of fair history–which varies from hog breeding to sewing to baking to 4-H to poultry to souvenirs to beauty pageants and more!

My favorite items in this building were the century-old textiles that had won ribbons at the fair, the section about the annual Healthy Baby Contest, and the photos of the Fair Queen in her court–boy, formal gowns fall out of fashion pretty quickly. The 1980s dresses were particularly hideous…

Anyhow, I had overheard a docent ask a visitor if they had visited the “other building” and sure enough, right next door is the Richard O. Jacobson Hall and Ronald and Margaret Kenyon Gallery. This building had all the spectacle that the Deets Museum did not – a giant replica of a corn dog, a fun house mirror, interactive peep holes (complete with photos of Sally Rand and colleagues!) and an interactive video and light show experience interpreting the 1932 Fair event when two antiquated steam engines collided on the fairgrounds. (The spectacle drew 45,000 people and the narrator seemed proud to inform us that only two people had minor injuries. But this was a planned event …it shouldn’t have had any injuries!)

Anyhow, the two buildings comprise the Richard L. Easter Museum Complex and are described on the Iowa State Fair website as:

Take a step back in time at the air-conditioned Ralph H. Deets Historical Museum where you can explore more than 150 years of Iowa State Fair history and memorabilia. Stop by Richard O. Jacobson Hall and Kenyon Gallery to take part in an air-conditioned, interactive exhibit highlighting the Grandstand staging of an authentic train crash in 1932, and check out some of the other hands-on activities and displays showcasing State Fair history.

I don’t know if the Museums are open at any other time during the year, but they’re definitely worth a visit the next time you’re at the Iowa State Fair!

Have you visited any fair museums or historical displays? How do they compare?

Error: Twitter did not respond. Please wait a few minutes and refresh this page.

The latest news on WordPress.com and the WordPress community.

A blog about life in the museum world.

Thoughts about museum labels and interpretation

Digital strategy for museums and nonprofits

Life, the River, and Beyond

thoughts on museums, content, design, and why they matter

The Museum of the Future
Fresh in the Field